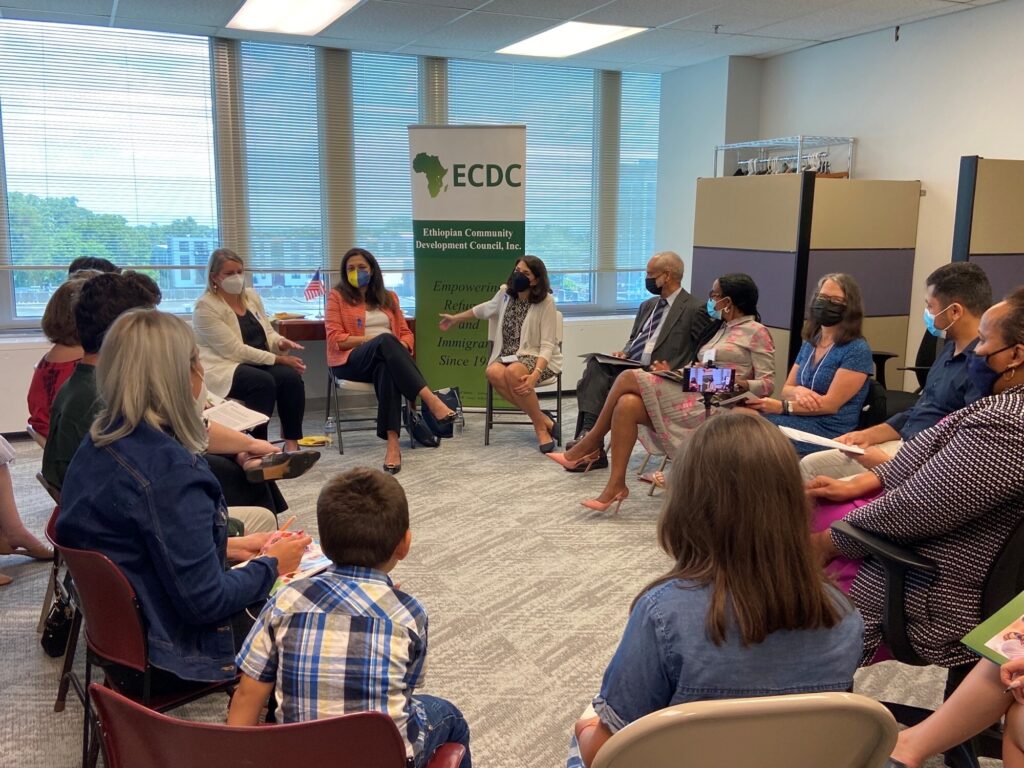 At the event, Under Secretary Uzra Zeya, Senior Official Elizabeth Allen, and Assistant Secretary Julieta Valle Noyes had the opportunity to speak with Tsehaye Teferra, Ph.D., ECDC President and CEO, Sarah Zullo, Director of ECDC’s DC Metro branch office, and refugees from Afghanistan, Cote d’Ivoire, El Salvador, and the community volunteers and sponsors who have been assisting them to settle in the United States and establish their new lives here.

During the discussions, the refugees shared their experiences, detailing the support they received from community sponsors and their challenges. The community volunteer and sponsor group representatives also shared their successes using this model while describing some of the challenges refugees faced in accessing various services such as education for their children. They reported this was an enriching experience for them as well. They have built lasting friendships with these families and are advocating for showing how “hard-working they are and how they are doing everything the system is asking them to do to become self-sufficient, contributing members of the communities in which they are living.

Under Secretary Uzra Zeya addressed the group, expressing appreciation for the success of the community sponsorship program. She said, “I want to say I am so moved to meet all of you. Welcome to America! You are already contributing in such vital ways to our society. I know your journeys here have been difficult and painful, but we want to help you build a new life here. We are so grateful to our friends and your incredible contribution. Because in the end, it is all about America, who we are, and what our country stands for. And we are a country built on welcoming the vulnerable; we are a country that believes in building bridges between cultures.”

She added, “And this has been an emotional day for many of us. For me to hear your stories, to meet all of you, and to see the power of people and communities gives me so much resolve for us to carry this work forward and to scale up this community model, because we need our country to recognize the tremendous value and the win-win dimension of our being a country that embraces and welcomes immigrants and refugees to our shores.”

Ambassador Noyes made the following remarks: “I want to give a shout-out to ECDC, which piloted the community sponsorship model long before it became an official program. ECDC recognized the need and ran a First Friends program, and it is wonderful to see that it is a model that has been working for a decade now. Our country is much richer because of the contributions we get from all around the world. We are a stronger, more vibrant, and frankly more fun country because of that mosaic of contributions that we get from all the new arrivals and future U.S. citizens. So thank you, friends, sponsors, new arrivals, and welcome.” Prior to the Community Sponsorship program, ECDC’s DC Metro branch had been running the First Friends community mentorship program since 2012, after the program’s success and popularity at ECDC’s branch office in Denver.

Senior Official Elizabeth Allen said: “I am deeply grateful to everyone who has been here to share your story. For people unfamiliar with refugee resettlement, it feels like a matter of process or logistics. It is certainly both of those things, but what you are making it is actually what it is: a matter of humanity. And it is important to know and tell your stories because it gives people the understanding of what’s possible, what they can do to help welcome people into the United States.” 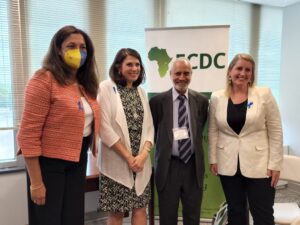 Tsehaye Teferra, Ph.D., President and CEO of ECDC, pointed out that there are alarming numbers of African refugees in precarious situations in conflict zones. As an example, he mentioned the plight of tens of thousands of Eritrean refugees who went missing from their refugee camps in northern Ethiopia after Eritrean troops invaded the region. He also described how refugees in Africa are forced to flee from country to country as the safe haven that initially received them enters into a conflict and becomes no longer

secure, citing the example of Ethiopia, which for years had hosted refugees from the region but is currently engaged in armed conflict with itself becoming a source of millions of displacements.

Foodhini, a refugee-owned and run restaurant located in Washington, D.C., catered the event. Various dishes featuring cuisine from the chefs’ countries of origin are served at Foodhini. Owner and founder Nobstaa Philip Vang was also at the event to meet and have a chat with the visiting officials.

Tsehaye Teferra thanked the officials for their visit and for the time they devoted to listen to refugees, volunteers, and community sponsors. This demonstrates the Administration’s commitment to the cause of refugees, he said.