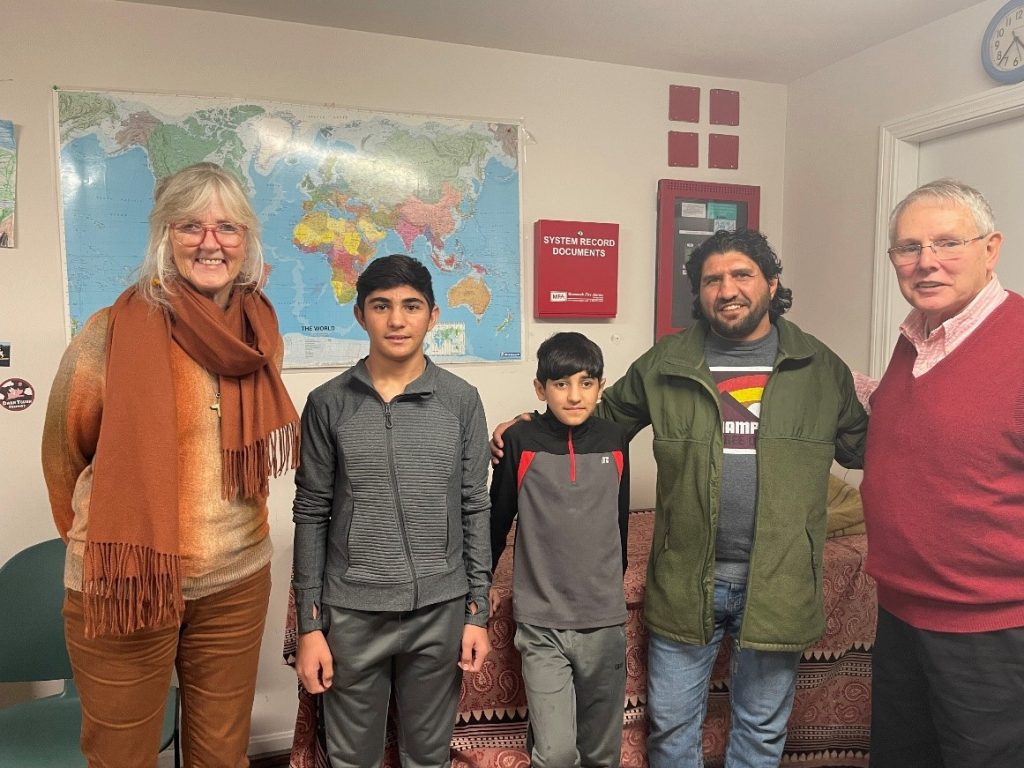 The Co-sponsorship Experience Doubled the Size of His Heart

Over glasses of Chai tea, Gul Rahman shared the story of his family’s arrival to the US and their journey with their co-sponsorship team in Brattleboro, Vermont. Gul Rahman, his wife Sakina, and their two sons and daughter arrived during the winter and it was scary because they couldn’t speak English. The first time they met their co-sponsors was in a small room of the university campus housing where they lived temporarily for the first few months. The co-sponsorship team brought a photo book with pictures of all team members and their roles to help the family get to know them. At that first meeting, Gul Rahman and his family shared Chai tea, their favorite, with the co-sponsors and he said he immediately felt very happy and less afraid.

One of the first activities the co-sponsors did with the family was to take the boys sledding. It was a new experience and lots of fun. Gul Rahman said his family is very appreciative of all that the co-sponsorship team has done with them, and he listed various other adventures they have had together. Some of the highlights included going to the circus, picking apples, tapping maple trees, visiting the local Hogback Mountain overlook in the Green Mountains, and going with other Afghan families to select live goats to slaughter. Lise, the co-sponsorship team leader, shared that Gul Rahman’s children also went to summer camp and are all excellent swimmers. She has taken them to both the pool and the lake.

When asked about how they schedule all their activities, Lise said, “It’s all calendar, calendar, calendar.” The co-sponsorship team communicates among themselves via texts and emails, but they also have an extensive Google calendar which they use to keep track of the family’s activities and appointments. They also set up a whiteboard calendar in the family’s living room. Gul Rahman commented, “[the whiteboard] is good because we look at it and memorize if we have important dates coming.” In addition to the managing the children’s schedules, Gul Rahman and his wife Sakina are also incredibly busy. Gul Rahman works at the local plank flooring business. He said it is very hard work and takes a lot of energy, but after work at 3 pm he goes straight to English class at ECDC’s Multicultural Community Center (MCC). Sakina goes to English class at Vermont Adult Learning center four days a week and also takes sewing classes five days a week. Sakina is part of an Afghan women’s sewing group at the MCC. The sewing group has allowed her to become more independent since her arrival and given her a place to socialize, in addition to learning a new skill. Sakina excitedly brought out a piece she was working on in sewing class to show.

Both Lise and Gul Rahman said that they are proud of Sakina’s progress. In the beginning, Sakina would often try to make herself less visible in the house and relied on her husband for most things, but now she is thriving. When the co-sponsors come over now, Sakina loves shaking hands and immediately starts talking with everyone. Lise shared that Sakina makes the best naan bread.

Through all the positives, there have been some challenges. For example, Phillip, one of the co-sponsors, shared that Gul Rahman’s stove broke and he learned the hard way that often time things in the U.S. aren’t fixed immediately. Also, when the family had to pay bills in Afghanistan, someone came to the door asking for money, but in the U.S. they have to remember on their own. The co-sponsors realized that they need to remind the family the day before bills are due to avoid late fees or services being cut off. Gul Rahman says he is proudest of the education that he, his wife, and also their children are receiving.

The co-sponsorship experience has been a success for everyone involved. Phillip said, “It has doubled the size of my heart!” Lise added, “It has been a very precious experience to be working on something so meaningful for people we care about so much.”