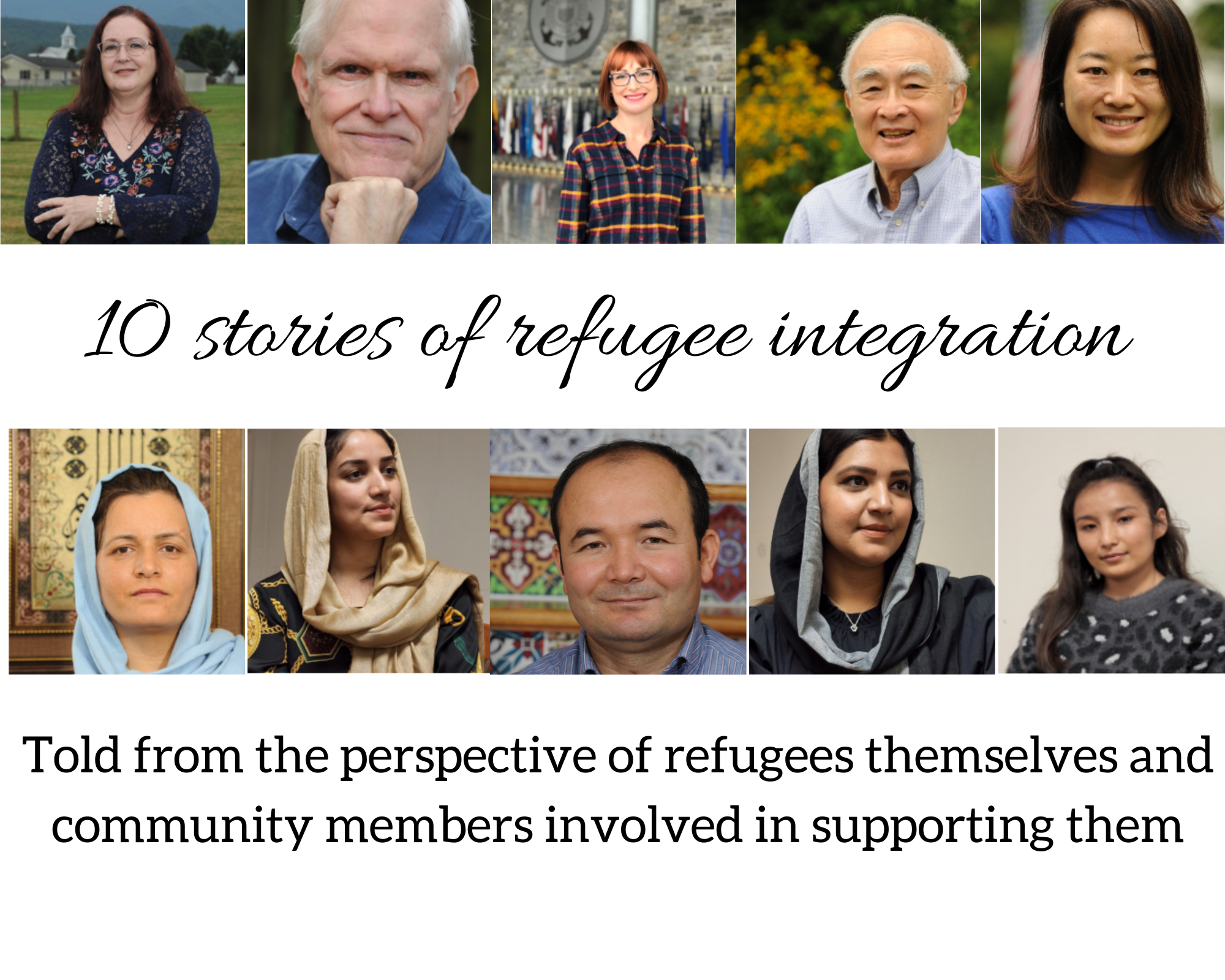 Refugee Integration in Virginia is a project supported by Virginia Humanities designed to inspire through storytelling to capture refugees and community members’ experiences in building community together and showcase the two-way integration process. The exercise is believed to highlight the broader global migration perspective, the process of refugee admissions, the concept of integration, and the role of community engagement from the people directly involved.

For this project, to reflect on their experiences, ten participants were interviewed, five from the refugee community who have settled in Virginia from 2014 – 2022, and five community members that are/were extensively engaged in welcoming and providing support to newcomers during their resettlement period. The interviews were geared towards understanding what successful integration looks like, how refugees and community members can best partner, building empathy for the complexity of integration by listening to personal stories, and identifying different challenges and opportunities during refugee integration.

Hear their stories and read about their lives below.

Lisa McQuail lives in Luray, Virginia, and works from home as a federal Proposal Manager on health-related projects for a large Native American tribe. She studied Native American and Southeast Asian anthropology and prehistoric archeology for many years.

She worked as a field archeologist and in museums, including the Smithsonian Institution’s National Museum of Natural History. After September 11th, 2001, Lisa decided that with her knowledge of the cultures of Afghanistan and Iraq, she could contribute to federal and military efforts to fight terrorism in those countries. She has worked as a Federal Proposal Manager for 20 years on many U.S. military projects in Afghanistan and elsewhere. Lisa sponsored two of her Afghan colleagues for Special Immigrant Visas because she admired their courage in working to fight terrorism and appreciated the fact that they were now the targets of terrorism in their own county.

Lisa volunteers for causes in her community in Virginia including food security, African American History tourism, and workforce training. She is an enthusiastic supporter of Virginia’s Native American tribes. Lisa has three children- Erin, her daughter, two sons Scott and James, and one Grand Dog “Solchan”, Seven, a rescue from South Korea adopted by her daughter.

Engeela Sharifi arrived from Afghanistan in February 2019 and lives in Virginia. Engeela is a mother of four girls and a son. She graduated from the Said Jamaluddin Teachers Training, English department, in Afghanistan. She worked as an English teacher in the Women Vocational High School, in Kabul city, for five years.

She also worked as a supervisor in an NGO, Afghan Women Social Services Organization, for two years and as a director for five more years in the same organization. Before leaving Afghanistan, Engeela worked for Chemonics International for two years as the Gender team leader. For the last two years, she has worked as an administrative specialist for Prince William County. Her mission is to support her children attain their goals.

Amy Hjerstedt has called Arlington, VA, her home since July 2021. Prior to moving to Virginia, she lived in the Upper Peninsula of Michigan in Sault Sainte Marie. Her spouse is on active duty in the military, and she has two sons.

Prior to volunteering with ECDC, Amy was an adjunct professor at a rural university where she taught American government and politics. Additionally, she served her communities (and there are several, as she has moved many times because of her spouse’s military career) through the League of Women Voters by helping with voter registration and education and advocacy initiatives. Currently, Amy guest teaches for Arlington Public Schools, serves on the Tuckahoe Elementary School PTA board and the Falls Station HOA condominium board. She volunteered with ECDC to learn about her new community and feel more connected to her fellow Arlingtonians. She holds an Associate of Arts degree, a Bachelor of Science in Social Science, and a Master’s degree in Political Science. Amy is a military veteran and enlisted while growing up in rural Buffalo, MO.

Florence Ahmedi arrived in the U.S on August 21, 2021, after the crisis in Afghanistan. Florence has a Master’s degree in literature and Persian languages. She was a lecturer at the Maiwand University in Kabul, Afghanistan. She is now an intern at ECDC and works at the BeThrifty store in Northern Virginia. Her wish is to continue her education and obtain her Ph.D.

Kenn Speicher is a co-founder of NOVA Friends of Refugees, an all-volunteer grassroots network of more than 1,000 members formed in 2016 to assist and advocate for refugees.

He is one of the organizers and board members of its sister organization, One Journey, a global grassroots movement changing the refugee narrative by celebrating their talents, stories, and accomplishments. Working with resettlement agencies and other aligned groups, NOVA Friends of Refugees and One Journey envision a world where refugees are welcomed, valued and supported so they and their host communities can thrive together. Kenn is a leader in the social justice activities of the United Methodist Church in Virginia, especially in the areas of peace, non-violence, immigrant and refugee advocacy, and support for veterans dealing with PTSD. He leads advocacy and community engagement for the Northern Virginia Coalition for Refugee Wellness, assists education projects in Haiti for Mount Olivet UMC in Arlington, and organizes the annual Arlington CROP Hunger Walk. A graduate of the University of Delaware (M.P.A from the Biden School of Public Policy & Administration), Kenn is retired after a career in advertising and marketing. He lives in Arlington with his wife Ann.

Farida Atmar is from Afghanistan. She arrived in the U.S. on September 2nd, 2022, after the crisis and fall of Kabul. Farida has a BA in Education, and taught 5th and 6th-grade students Pashto Grammar at a local public school, Bibimahro, in Afghanistan. Today Farida is an assistant teacher in a VINCI School in northern Virginia. She aspires to continue her education to a Master’s level.

Todd continued to work with the original community center and its programs, which included the predecessor of the current Arlington Community High School and the adult English as a Second Language program (REEP). He also originated and ran a neighborhood computer center in the original community center. His four grandparents were immigrants to the United States. They came from the late 1800s and the last arrived in California in 1912.

On February 19, 1942, President Franklin D. Roosevelt signed Executive Order 9066 authorizing the secretary of war to prescribe certain areas as military zones, resulting in the incarceration of nearly all 120,000 Japanese Americans during the war. Two-thirds of them were U.S. citizens, who had been born and raised in the United States.

Todd spent his toddler years in American detention camps with his parents and grandparents in Arkansas. During World War II, the U.S. government incarcerated them because they were Japanese Americans. His grandparents were prohibited by U.S. Immigration and Nationalization laws from becoming U.S. citizens because they were Japanese until December 1944, when President Roosevelt suspended Executive Order 9066 by the Supreme Court‘s  decision. Detainees were released, and the camps were shut down by 1946. Individuals born in Japan were not allowed to become naturalized US citizens until after the passage of the Immigration and Naturalization Act of 1952.  On February 19, 1976, President Gerald Ford signed a proclamation formally terminating Executive Order 9066 and apologizing for the internment, stating: “We now know what we should have known then — not only was that evacuation wrong but Japanese-Americans were and are loyal Americans.

Todd enjoyed sharing immigrant stories with the immigrants and refugees living along Columbia Pike. He and his wife moved out of what is now the Arlington Mill neighborhood in 2012, and returned in 2015.

Reza Yawari moved to the U.S. in 2014 through the Special Immigrant Visa given to Afghans that worked for the U.S. government in Afghanistan. Since then, Virginia has been home for him, his wife Sarah and their nine-year-old son, Amir. A proud American and Virginian, Reza participated for the first time in a U.S. presidential election in 2020. Reza currently works as a senior program officer with FHI 360, an international development agency that works in over 65 countries. Previously, he worked at ECDC, managing sub-agreements with local non-profit organizations across the U.S. in support of refugee resettlement and community integration. From 2007 – 2014, he worked as a Country Strategic Advisor in the U.S. Embassy in Kabul, Afghanistan. There, he worked with the United Nations Mission in Ethiopia and Eritrea as an Information Officer, based in Addis Ababa, with frequent travel to Asmara, Eritrea, to support the U.N. strategic communication and public information campaign. Before that he worked with Management Science for Health, Population Service International and Futures Group International.

Wendy Chan is the co-founder of One Journey, a movement dedicated to shifting the narrative of refugees and connecting them to host communities through storytelling, food, music, dance, and sport.

She is also the co-founder of NOVA Friends of Refugees, a volunteer network with over 1,000 members connected to support refugee resettlement work in America. Chan immigrated to the U.S. from China at the age of 12. Her immigrant background helped her appreciate the courage and tenacity of the refugees and see the talents they bring to America. Chan works at Accenture and holds degrees from the University of Pennsylvania, Johns Hopkins University, and the University of California at Berkeley. She is a recipient of the Washington Business Journal’s Minority Business Leaders Award and DC Mayor’s MOAPIA Ajay Ojha Volunteer Service Award.