Nangeyali came out of the Holloman Air Force Base, in New Mexico, to Carlisle, Penn. approximately two months ago, and has achieved many successes so far. A few days after his arrival, ECDC’s local partner, the International Service Center (ISC), was able to secure an apartment for him in Carlisle. Four weeks later, his case manager helped him get a job at D.B Shenker, a big freight forwarding company in Carlisle. He is excited about securing a job not only to live but also to support his wife, two kids, and parents who are still stranded in Afghanistan. 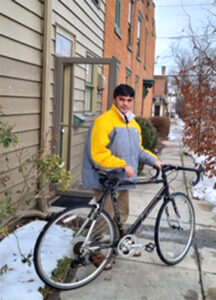 Nangeyali comes from a family where everybody is hardworking, including his parents and all of his brothers. He says his parents raised all their children to work hard in order to serve the family and the country. Nangeyali was a high-ranking officer of the Afghan Special Forces who fought alongside the US Forces all over the Afghan territory until August 15, 2021.

Nangeyali’s experience in Pennsylvania so far has been smooth and positive. He has received help and assistance from neighbors, the community, and the ISC to start a new life with dignity. One of Nangeyali’s neighbors gave him a bike, and he is using this bike to commute to work every day. Even the frigid winter days do not stop him from biking to work for 25 minutes, each way.

Nanagyali is grateful to the US Government, ISC, ECDC, and all the wonderful people who have helped him along the way. He wants to work hard to achieve his American dream and wishes to be able to help other less fortunate people in the future.