ECDC’s Wisconsin branch office, the Multicultural Community Center, celebrated its 1st Anniversary, and its parent organization, the ECDC based in Arlington, also kicked off its commemorative year for its 40th year of operations at an event held in Wausau on January 19th.

The event was held at the Jefferson Street Inn Ballroom in downtown Wausau and was well attended despite a heavy snowfall the night before. Present were the city Mayor Katie Rosenberg, State Representative Snyder, a representative from the State Refugee Coordinator’s office, community leaders, community members, volunteers, and refugees. ECDC’s founder and president, Dr. Tsehaye Teferra, flew in from the national office for the occasion.

In his welcoming speech, the Center’s Director, Adam VanNoord, highlighted the organization’s accomplishments over the past year and thanked the community for their support.

“This evening, I hope you are encouraged as I look back at a year of accomplishments that have directly impacted the well-being of new community members from Syria, Afghanistan, Burundi DRC, Somalia, Sudan, and most recently, Ukraine,” he said.

“While the inherent challenges of refugee resettlement are well-understood, we have witnessed a profoundly caring and generous response from organizations, volunteers, and professionals. People go above and beyond in a community-wide effort, demonstrating our ability to overcome great challenges.” “The welcome,” he said, “has involved hundreds of people and committed stakeholders.”

The Multicultural Community Center later recognized individuals who contributed to its successful year by presenting them with plaques.

Mayor Katie Rosenberg, a strong proponent and founding member of the Center, shared her experiences welcoming a family of Afghan refugees to Wausau and emphasized the importance of the United States as a nation of hopes and dreams.

Eric Yonke, the Community Engagement Coordinator for the Multicultural Community Center, introduced the speakers, among whom was Reverend Rebecca Voss, later recognized as a founding partner of the MCC. Mayor Rosenberg and Reverend Voss facilitated the community town halls, paving the way for ECDC to establish a branch office in Wausau.

Reverend Voss recounted, “I remember having tears when leaders of our community opened their hearts and became excited about welcoming refugees to Wausau.”

In his remarks, ECDC President Dr. Tsehaye Teferra said, ‘today is the first anniversary of our branch in Wausau. It is also fitting that we are kicking off our 40th Anniversary commemoration here in Wausau. That shows the importance and the gratitude we have for this community for the support we have received here.”

“Some of you may recall the first town hall we co-organized with Reverend Rebecca from New Beginnings for Refugees and the University of Wisconsin to explore the possibilities of opening a resettlement office here in Wausau,” he recounted.

The purpose of the town hall was to discuss with the community if refugee resettlement in Wausau was feasible and something the community could accommodate.

“The enthusiasm and level of preparedness from the different community leaders reassured us, at that time, that Central Wisconsin would be a perfect place to resettle refugees,” recalled Dr. Teferra.

“Tonight’s event is a tribute to all of you who have contributed in one way or another to make this a reality. Today, we have successfully resettled 165 newcomers in Central Wisconsin.”

“I congratulate our staff, colleagues, partners, and community sponsors for their tremendous work in ensuring that our newcomers have been well-received and are well on their way to rebuilding their lives.”

He also commended Adam VanNoord, Eric Yonke, and Laura Barbe, the three staff members who were there at the beginning to set up shop, learn the ropes and start work all at the same time.

Through their tenacity and hard work, the center is thriving and now has 14 staff members.

The event included a poetry recital by a Sudanese refugee, Mohammed Alhalla Kuku, recited in English by MCC Case Worker Leah Van De Loo, who also presented an art piece produced by refugees, young and old, depicting in their way what it means to be a refugee. A video, shot in Wausau, depicting co-sponsorship was also shown. Live music entertainment accompanied the open house and refreshments that followed. 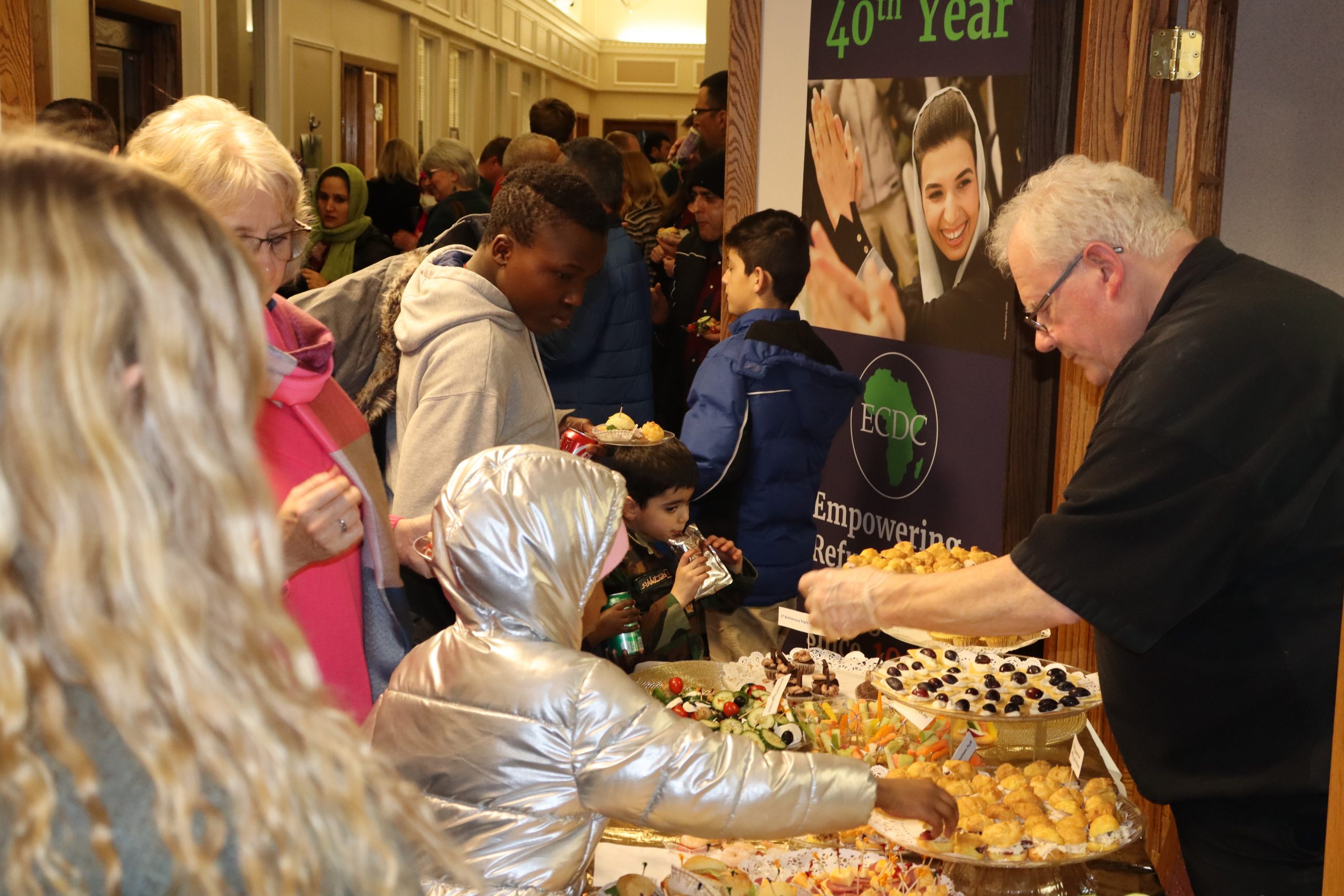 The successful event to celebrate the Multicultural Center’s 1st anniversary and to officially kick off ECDC’s 40th was made possible due to the big heart of welcome that Wausau, Marshfield, and Stevens Point have given to newcomers from around the world.

Earlier that afternoon, a refugee family from Congo arrived. Dr. Tsehaye joined the MCC team to welcome the refugees who had spent decades in a refugee camp in Zaire.