Brattleboro, Vt.–“We were in search of friendly communities that would welcome newcomers, and Brattleboro was recommended as a perfect site for a new branch office,” said Tsehaye Teferra, Ph.D., President, and CEO of ECDC, addressing an audience gathered at the Brattleboro Museum & Art Center to celebrate the first anniversary of ECDC’s Multicultural Community Center in this southern Vermont city.

Having traveled from Arlington to attend the celebration and hold meetings with branch staff, Teferra said that although the goal had been to start the resettlement program slowly, the events in Afghanistan called for a rapid process. This was the first time in 50 years that Southern Vermont became open to refugee resettlement.

“Vermont is one of America’s most safe, happy, healthy, and beautiful states, and we hope that refugees feel the same,” said branch director Joe Wiah in his speech. “We have provided a friendly, supportive environment with our welcoming, small-town approach. It is our experience that newcomers have benefited from more generous and responsive services in Vermont than in most U.S. states,” he added. Newcomers have found suitable apartments, decent jobs, and different opportunities they are exploring with small businesses, art, food, and craft-making,” Wiah said.

Teferra expressed his appreciation for the partnership with SIT/ World Learning, saying, “the collaboration between a community-based organization and an academic institution is a new opportunity and an ideal partnership. We are grateful for their assistance; they provided the university campus for us to house refugees. I hope this kind of collaboration will continue and serve as a role model in other cities,” he said.  He also expressed gratitude to the Shapiro Foundation and the co-sponsorship program support from the Catalyst Fund, without which it would not have been possible to jump-start the program there.

Wiah recognized the Brattleboro Development Credit Corporation for its support in making Brattleboro a welcoming city, saying, “they quickly gathered employers, and today we have

about 46 newcomers fully or partially employed. He also thanked SIT/World Learning for providing its beautiful campus and leading the newcomers’ English language and cultural orientation sessions, adding that Bennington and Brattleboro school districts and the community’s collective efforts have “taken refugee resettlement in southern Vermont from a concept to action.

Celebrating One Year of Community Building

Southern Vermont responded to the Afghan crisis with over 200 trained volunteers, 14 co-sponsorship groups, and 15 support teams. ECDC MCC scaled up its programming to include 15  staff from diverse backgrounds. This collective effort was named 2022 “Brattleboro’s Unsung Heroes,” while  MCC’s director, Joe Wiah, became a recipient of the Con Hogan Award as Vermont’s Civic Entrepreneur of the Year.

But Wiah attributes his success to the community. Support came from various sources, including the Bennington County Open Arms, which has supported all eight of ECDC’s Bennington families, while in Brattleboro, St. Michaels’ Interfaith Refugee Ministry and the Rotary Club are each supporting four families, and the Beloved Community Group supports two more. Additional support has come from Brattleboro Area Jewish Community, UCC Group, the Spanish-Speaking Group, Rockingham Group, Deerfield Valley New Neighbors Project, plus all the support teams of the ArtLords, the Sewing Team, and half-a-dozen other refugee households, Wiah said.

“All together, we estimate that you’ve found 20 apartments for refugees, furnished 26 apartments, and put in nearly 12,000 hours of community service as co-sponsorship groups and support teams,” he added.  We are building a Vermont of welcoming, resilient communities where refugees who fled the world’s worst crises are building new lives and new homes, where neighbors know and support each other, and where everyone can find peace, hope, and joy in a new bright future together.”

MCC-Brattleboro has been a leader in co-sponsorship, with three-fourths of the refugees resettled in 2022 being assisted by either co-sponsorship or support teams, one of the highest percentages in ECDC’s network.

The five ArtLords members who reside in Brattleboro—Marwa, Negina, Meetra, Zuhra, and Abdullah—joined other local Afghan creators for a free one-day pop-up exhibition at the BMAC earlier in the day. The public was invited to view the progress as The ArtLords created a large mural-style painting on panels in the Wolf Kahn & Emily Mason Gallery.

The pop-up exhibit also featured work by other Afghan refugees who recently arrived in Brattleboro, including handmade kites, robots built by a robotics expert, and garments made by a sewing group. 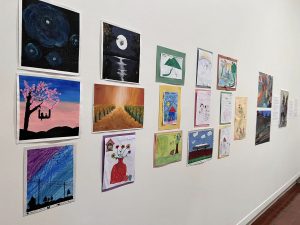 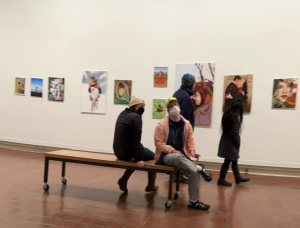 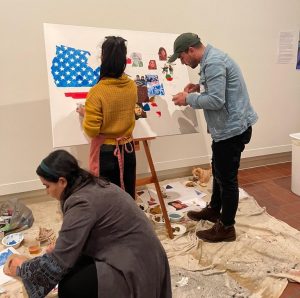