ECDC Supports Afghan Arrivals at All Its Resettlement Sites

The Ethiopian Community Development Council, Inc. (ECDC) responded to the Department of State’s request for resettlement agencies to participate in its Afghan Placement and Assistance (APA) program, which launched September 1. ECDC has been approved to resettle 3,100 individuals across its network of branch offices and affiliated organizations in 15 cities across the country. ECDC has been resettling Special Immigrant Visa holders from Afghanistan at several network locations for many years and is experienced in welcoming and integrating this population.

The APA program is designed to serve certain Afghan nationals who were highly vulnerable following the Taliban takeover of Afghanistan and granted legal entry into the United States through humanitarian parole. Many of these individuals have already arrived in the country on evacuation flights, and others are still in a third country awaiting entry. The Department of Defense is providing temporary housing and initial services such as medical screenings and work authorization applications to more than 50,000 Afghan nationals at eight Safe Havens at military bases around the country. After completing processing at the Safe Haven, individuals are assigned to a refugee resettlement agency, such as ECDC, which is participating in the APA program. ECDC then arranges placement with one of its local affiliates that will assist individuals and families with the initial steps of rebuilding their lives in the United States. The local affiliate office, together with community partners, will secure housing and basic necessities during the first 30-90 days as well as provide cultural orientation, assistance enrolling in education programs, legal assistance to change their immigration status, employment services, and other referrals as needed by families enrolled in the program.

“ECDC is pleased to play this role to support the United States in fulfilling its moral obligation to protect its Afghan Allies,” said Dr. Tsehaye Teferra, ECDC’s President and CEO. “We have been impressed with how enthusiastically our affiliates have responded to the challenge of this moment. We are working closely with our government partners and sister resettlement agencies to build on our experience and innovate to meet the unprecedented need.”

The APA program runs through March 2022, but ECDC expects to resettle 2,200 or more arrivals before the end of December. “Due to the large number of arrivals that are expected in a short period of time, creative contributions from community partners at all levels is required to ensure successful short- and long-term outcomes for newly arriving families,” said Jessica Chapman, ECDC’s Director of Community Engagement. “We encourage individuals, businesses, community groups, and service providers to reach out to the resettlement agency nearest them with offers of support.” The greatest needs are cash contributions, housing options, furniture donations, and employment opportunities.

Contact information for ECDC’s network of affiliates can be found here.

Agency names and locations are included below: 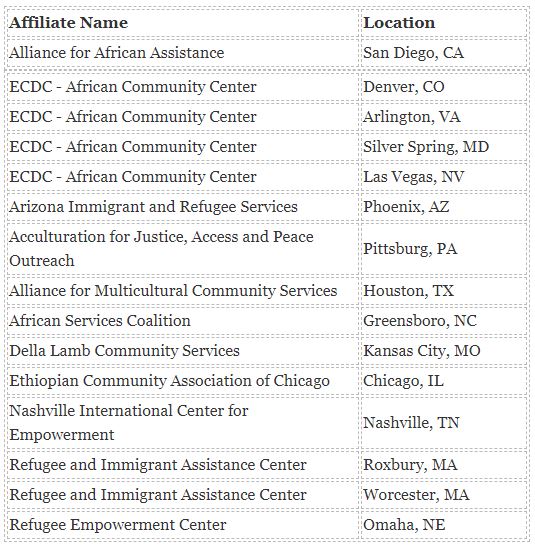