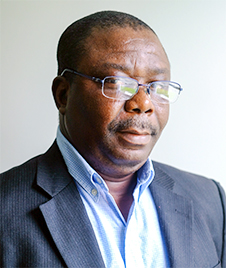 After careful consideration and community consultations, The Ethiopian Community Development Council, Inc. (ECDC) proposed Brattleboro, Vermont as a new refugee resettlement site in its annual funding proposal to the Department of State’s Bureau of Population, Refugees, and Migration (PRM) for the Refugee Admissions Program. With generous support from the Shapiro Foundation and Braden-Harder & Lawrence Harder Charitable Fund, ECDC has been able to hire Joe Wiah as the Director of the Multicultural Community Center it plans to establish.

Mr. Wiah comes to ECDC with more than a decade of experience in the non-profit sector serving vulnerable populations both in Vermont and internationally in Africa. Most recently, Joe was a Housing Case Manager for Southeastern Vermont Community Action (SEVCA) in Brattleboro, through which he helped Vermonters from 15 towns within Windham County access housing, fuel, food, and home repair services. Prior to that, Joe worked for Pathways-DC and Pathways Vermont, providing needed services to clients struggling with mental health issues or returning to communities after time in prison. Internationally, Joe’s work focused on creating legislation, policies, and programs that contributed to the disarmament, demobilization, rehabilitation, and reintegration of child soldiers in Liberia.

“Joe is an excellent person for this role because he is well-versed in the social service system of Vermont as well as international circumstances and environments which create the need for refugee resettlement,” said Dr. Tsehaye Teferra, ECDC’s President and CEO. “His personal compassion and commitment to helping those in need combined with his budgeting, strategic planning, and grant management skills are will ensure that our Brattleboro program is successful.” In his new role, Mr. Wiah will be responsible for coordinating with community stakeholders and preparing to meet the needs of refugees related to employment, affordable housing, medical care, education, etc. as well as broader participation in the community’s civic life.
Mr. Wiah is originally from Liberia and holds a Master of Arts in Intercultural Service, Leadership & Management from SIT Graduate Institute in Vermont, and a Bachelor of Arts degree in Philosophy from the Catholic University of Eastern Africa, Nairobi, Kenya. “As someone with firsthand experience being welcomed as a newcomer in Vermont, it is a privilege to have been chosen by ECDC to serve as that bridge to connect our new neighbors to our community,” said Joe. “I am excited to join this community of experienced professionals, and look forward to working with all local, regional, and state partners to collectively make this dream a reality.” Joe will commence his employment on September 20.