Yesterday, the President of the United States announced the government’s plan to provide more than $1 billion in funding towards humanitarian assistance to Ukrainians affected by the war and to welcome 100,000 Ukrainian refugees to the United States through a range of legal pathways. The Ethiopian Community Development Council, Inc. (ECDC) commends the Biden administration’s announcement and generous offer by doing its part to respond to what UNHCR indicated is Europe’s largest refugee crisis in a century.
The escalation of violence in Ukraine has forced more than 3 million people to flee, and 12 million people inside Ukraine also need relief assistance and protection. The administration’s announcement stated that funding will provide food, shelter, clean water, medical supplies, and other forms of assistance and also indicated its intention to develop new programs to welcome Ukrainians who have family members in the United States. 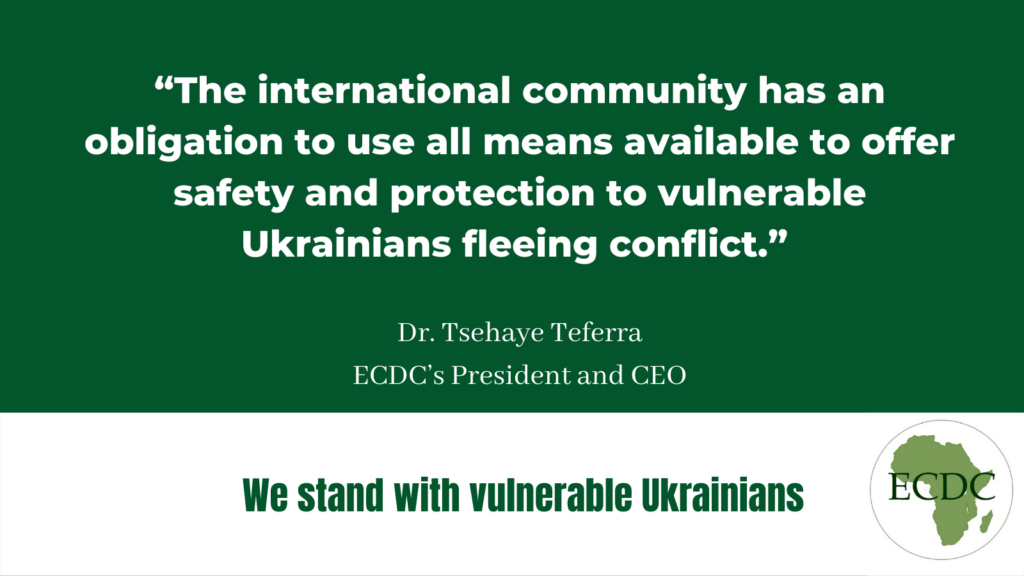 “While these developments are most welcome, the ECDC urges the U.S. government to take similar action to protect and save the lives of thousands of refugees in Africa and elsewhere, who have already been living in dire conditions due to prolonged conflict long before the war on Ukraine started,” said Dr. Tsehaye Teferra, ECDC’s President and CEO. “As we speak, refugees from Tigray, Eritrea, Sudan, South Sudan, Congo, and other countries continue to face harsh conditions, environments, and treatments. Women, children, and vulnerable groups in Africa continue to bear the brunt of armed conflicts, man-made famine, economic and political instabilities, wars, and aggression.”

There are more than 31 million refugees worldwide seeking protection. While the U.S. has made noble commitments, President Biden must prioritize rebuilding the U.S. Refugee Admissions Program so that these goals can be realized, not just for Ukrainians but for all those affected by similar situations. ECDC stands ready to assist with welcoming and integrating all refugees admitted to the United States so they become contributing members in their local communities.