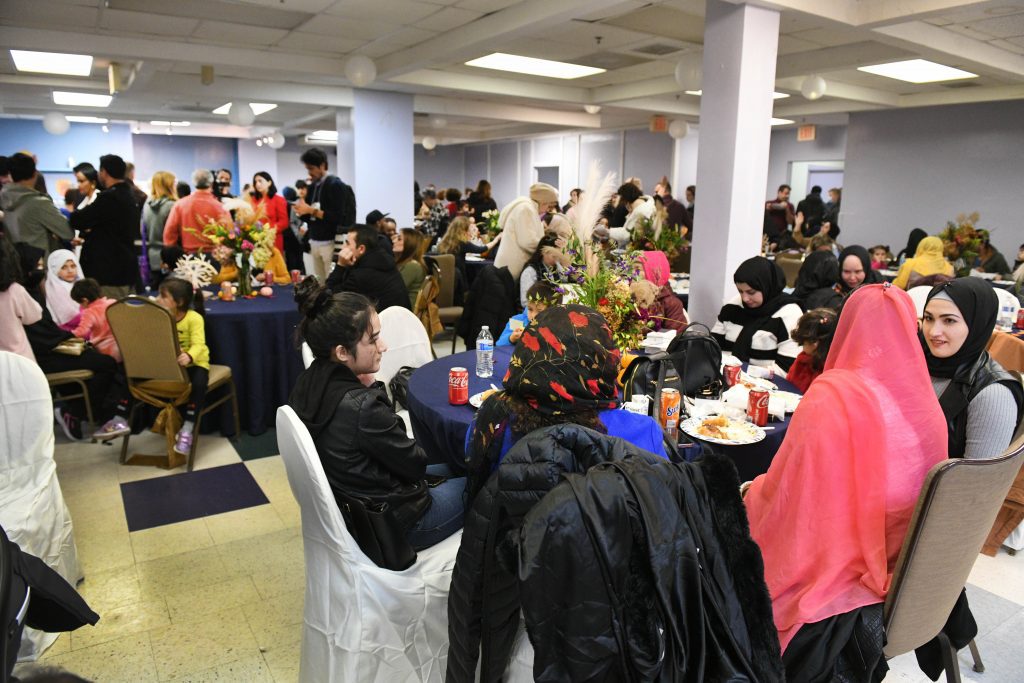 The 10th Anniversary of this American celebration makes a colorful comeback.

After a two-year hiatus due to COVID, this annual Refugees’ First Thanksgiving Dinner, organized by ECDC’s local branch office, the African Community Center (ADCC-DC Metro), made a comeback with full force.

This year’s attendance was significantly larger than in previous years due to the influx of Afghan refugees resettled in the DMV area, the two-year disruption, and many volunteers and community members coming to celebrate.

The potluck buffet offered the traditional American Thanksgiving feast and various dishes the refugees and community members brought. The dinner was superabundant, as was the variety, and several volunteers refilled the spread.

While most of the guests were Afghans, there were Ukrainians and others from the Central African Republic.

Children’s activities, coloring, and face painting, were organized in an adjacent room. Cultural music from the refugees’ countries of origin filled the air. Women, children, the elderly, babies, and youth from all age groups, with various native dresses and languages, shared the quintessential American dinner in the proper fashion of a family gathering. For most, this was their first Thanksgiving dinner.

Several donors contributed cash and in-kind gifts to make the event possible, including the free cell phones that were handed out to clients on a first-come, first-served basis.

“In the spirit of being thankful for safety and security, the event’s goal is to replicate the American tradition of coming together, of being welcomed by the community, learning about the culture of their new home, and participating in the celebrations, “said Tsehaye Teferra, President, and CEO of ECDC.

ECDC, as one of the nine resettlement agencies in the U.S., is very thankful for the outpouring of support from the community, the compassion, and the desire to help newcomers integrate and become productive members of American society. All of this and more was witnessed at the successful event on Sunday.