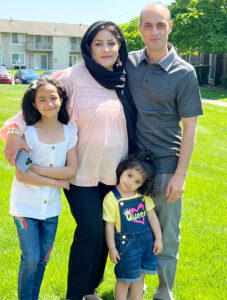 Seyar worked in communications in Kabul, helping U.S. government troops, its allies, the Afghan government, and the general Afghan population with internet and phone services. Despite the danger to himself (as he could be targeted due to his collaboration with the U.S. government forces) he continued to do his job to the best of his ability until the Afghan government fell and a truck bomb hit the building he was working in and many of his coworkers lost their lives. Luckily for Seyar, he was only minorly injured as he had stepped into an adjacent building minutes before the attack. Seyar, his wife, and three daughters were able to get into the Kabul airport and were flown into Qatar where they stayed for a few months.

By early January they arrived in the United States and stayed at Fort Dix in New Jersey. On January 26, 2022, he and his family arrived in Indianapolis. Upon arrival, they were welcomed by staff from their assigned resettlement agency, the Burmese American Community Institute, a community partner of ECDC, and local community members including Richard, who provided his AirBnB rental to the family at no charge. This home provided Seyar and his family with a clean, safe, and comfortable place to stay for a few weeks until BACI staff were able to secure permanent housing. BACI staff forged a partnership with an apartment complex owner named Sang, who came to the US as a refugee himself, and was very understanding and helpful when approached about renting apartments to Afghan families who came without credit history or proof of employment. BACI was able to secure apartments for not only Seyar but also his 4 siblings and their families, enabling them to reside together in the same complex as neighbors.

Seyar was also able to get much of his furniture provided by Saint Vincent’s, another non-profit in Indianapolis that provides household items to those in need. Now Seyar’s children are in school and doing well. Seyar himself is working alongside his brother at a nearby company, and his wife is attending ESL classes twice a week. BACI staff assist her with transportation to class as well as applications for work outside the home. With persistence and support from community members, it is clear that Seyar and his family will go far.

When asked about his experience transitioning to the United States and Indianapolis, Seyar said, “First of all I would like to thank the US government for evacuating us, mainly the U.S. DoD personnel for their heroic job under very difficult conditions. Since my arrival into the U.S., me and my entire family are very thankful for the support and hospitality from the BACI team. We are very happy to be here in Indiana and settled with our siblings.”